Paramecia
Paramecia is one of the three Devil Fruit types. These fruits give the users a power that can affect their body, manipulate the environment, or produce substances.

Paramecia types are also distinguishable in the manner in which their powers manifest.

Like all Devil Fruit abilities, Paramecia types can also be “awakened”, attaining the ability to use their Devil Fruits in different manners than they originally could. Doflamingo, when awakening the Ito Ito no Mi, can extend his string-creating ability from his own body to affect the environment, transmuting inorganic material, such as the ground and buildings, into vast quantities of strings that he can manipulate without even the need to touch them

:
Now lets jump by to Luffy like i said
Luffy belongs to 1st category of Paramecia: who can alter the user’s current physical state

there greatest feature of Gomu Gomu no Mi is its elasticity

What is elasticity?
The ability of an object or material to resume its normal shape after being stretched or compressed, stretchiness.

Depending on that Luffy will be able to produce elastic wave

What are elastic waves?
Elastic wave, motion in a medium in which, when particles are displaced, a force proportional to the displacement acts on the particles to restore them to their original position. If a material has the property of elasticity and the particles in a certain region are set in vibratory motion, an elastic wave will be propagated. For example, a gas is an elastic medium (if it iscompressed and the pressure is then released, it will regain its former volume), and sound is transmitted through a gas as an elastic wave.

These elastic waves will enable Luffy to produce Shockwaves

Again what are shock waves?
Shock wave, strong pressure wave in any elastic medium such as air, water, or a solid substance, produced by supersonic aircraft, explosions, lightning, or other phenomena that create violent changes in pressure. Shock waves dier from soundwaves in that the wave front, in which compression takes place, is a region of sudden and violent change in stress, density, and temperature. Because of this, shock waves propagate in a manner dierent from that of ordinary acoustic waves. In particular, shock waves travel faster than sound, and their speed increases as the amplitude is raised; but the intensity of a shock wave also decreases faster than does that of a sound wave, because some of the energy of the shock wave is expended to heat the medium in which it travels

like Sengoku used in Marineford :
he launched an explosive shock wave with a palm thrust, enough to send a majority of the Blackbeard Pirates flying a fair distance.

#this could be foreshadow for Luffy using shockwaves to fight Blackbeard

1.Luffy vs Satori (one of priests of Enel)

now both of them used impact dial the stored energy is released in form of shockwave , usually causing internal injuries to a living body, while not leaving any visible external damage. This blunt force is enough to wound even Luffy, who is usually immune to blunt force due to the Gomu Gomu no Mi. 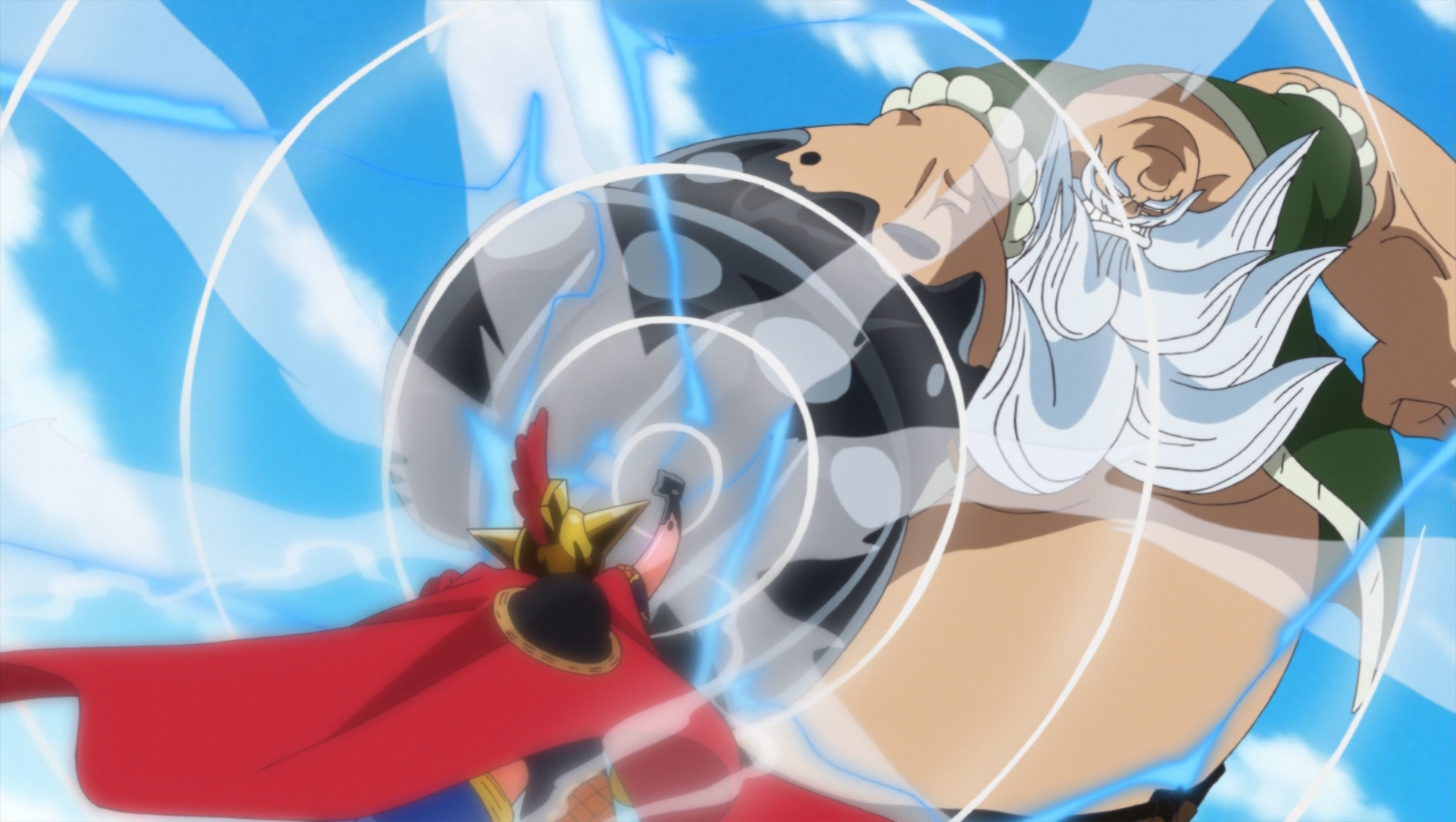 Chinjao as master of Hasshoken :
fighting style allows the user to control vibrations around their limbs to generate shock waves . This shockwave is powerful enough to destroy a metal shield or defeat a strong man easily. Sai also claimed that these attacks are unblockable and reverberating, causing defenses to shatter

5.Now finally my favorite: Luffy vs Rob Lucci
In the fight Lucci used his fishing move ,The Rokuogan is the secret and ultimate attack of the Rokushiki style. Rob Lucci states that only those who have absolute mastery of the other six skills can have access to this seventh skill.
The user places both his/her fists right in front of the target and launches a devastating shock wave in a forward direction. The burst is a reminiscence to that released by an Impact or Reject Dial, capable of bypassing the defenses of a rubber human such as Monkey D. Luffy, who is immune to blunt strikes under normal circumstances, and causes massive internal injuries. 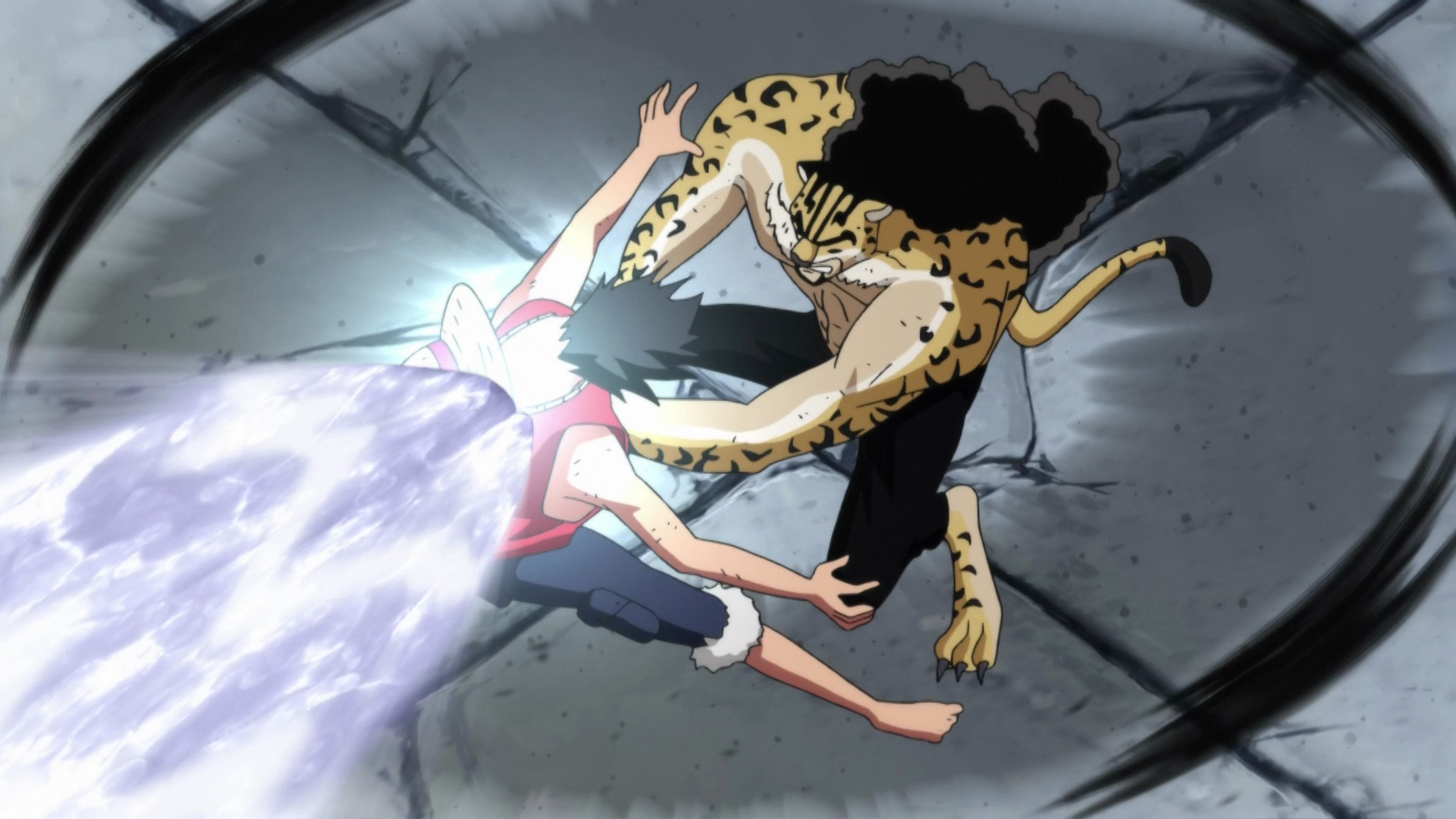 as he displayed it also

In this form Luffy will be able to manipulate any elastic medium such as air, water, or a solid substance,
and create strong pressure waves /shock wave