In chapter 818 we received a lot of information about Raftel or rather how to get there.
One of the most important panels though is this one where Inuarashi subtly confirms what many people have thought that the Ancient Kingdom is in fact Raftel.

He doesn’t say a specific number but only “for centuries”. However we actually know when was the last time someone was there.

It was 8 centuries ago. Yes, 800 years ago when the World Government came to existence.

Before his death professor Clover was just about to say the name of the Ancient Kingdom and we believe the name was ”Raftel”. But since this happened 3 years after Gol D. Roger’s execution, during the Great Age of Pirates, Gorosei didn’t want any more information to be revealed and they ordered to shoot him quickly before he could have done any more harm.

Also when we were shown the image of the Ancient Kingdom it looked like the eastern side could actually be the image of Raftel Crocus and later on Inuarashi “showed” us.

However how come that World Government themselves didn’t destroy Raftel and didn’t claim One Piece after Gol D. Roger’s execution to stop the Great Age of Pirates? Since they knew where Raftel was 800 years ago. Did they lost the information about Raftel’s position? We don’t think so. Since Gorosei know about the history it’s hard to believe they wouldn’t know where Raftel was.

The reason why World Government couldn’t do it is because Raftel is not where it once was.

And the reason for it lies in its name “Raftel”.

Raftel is formed by using two words: Raft meaning something used as a boat or floating platform and El which is a nickname for elevated railway system.

We believe that Raftel, once prosperous and enormous kingdom had such an advanced technology that they were able to relocate their island to another, safer place where enemies couldn’t reach them.

And that place was, as we learned from Inurarashi, between 4 islands.

However since it’s supposed to be an enormous kingdom how come someone just can’t be lucky and get there by using Log Pose? Well we know from Law that Punk Hazard can not be located by using one so this can be somehow avoided but most importantly since Raftel is able to float on the water it’s impossible for it to have magnetic field.

We think that this ancient civilization didn’t choose this spot between 4 islands randomly.

And this is when Nami and her knowledge comes to play. They chose this spot because those 4 islands were 4 different types of islands. Meaning they all had different weather. 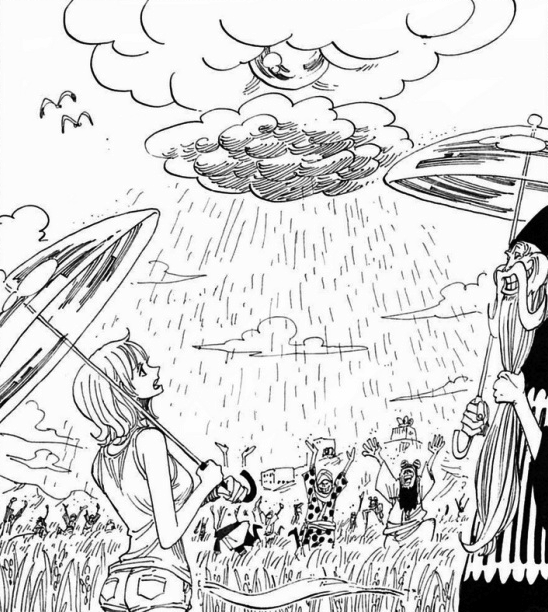 We know that each island in Grand Line has its own climate and we believe that this is also one of the reasons Raftel can not be found even by a mistake.

In every picture that Raftel has been shown so far we can see it being sorrounded by fog, mist and haze. This is probably the result of moving Raftel with it’s own climate to the spot between other 4 islands.

It’s even possible those extreme weather conditions created mirage or an illusion rather that there is no island even though there is supposed to be one. Similar to the Mirage Tempo technique which Nami uses to project an image which isn’t real

or she can even make her image completly disappear and make herself invisible.

However Nami will be able to figure this out since she is familiar with this phenomenon and will realize what’s happening.

where awaits the legendary treasure ONE PIECE!

If you would rather watch the video version of this theory then here it is: