Hello everyone ! I will show you a rather small theory today and it concerns Kaido’s death.

I don’t think I have to explain this fact right ? We all know that Kaido is looking for a way to kill himself and so it’s seems logical that before the end of One Piece he will reach his goal somehow. Watch Kaido’s first introduction :

I mean we haven’t seen the guy yet and Oda is already telling us that he wants to die ! How many manga can introduce this kind of character

.
Anyway, now that it’s clear for everyone, let’s continue.

With the recent revelation of the 824th chapter, I just thought about a character that will help or find a way to kill Kaido. I’m talking about this guy : 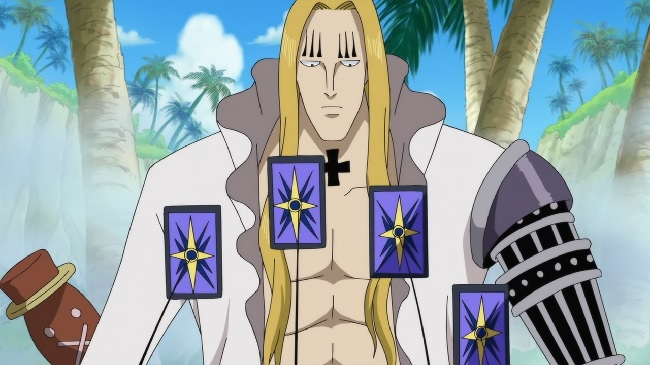 We don’t know what happened to Hawkins after the Kidd – Hawkins – Apoo alliance met Kaido. But we can already tell that Kidd refused to go under Kaido’s order so he ended up half-dead in a cage. We can already assume that Apoo betrayed the alliance and is now a part of Kaido’s crew. But what about Hawkins ?
I mean is it a coincidence that in one side we have a Yonko who is supposed immortal and is looking for a way to die and in the other side, we have a fortune teller that can see “the shadow of death” upon someone ? I’m sure that Oda has something in store for these two characters.

I won’t try to guess what will happen exactly, Oda’s imagination is not in my league anyway

. But I’m telling you this guys, I’m sure Hawkins prediction will have a huge impact on Kaido’s death.

That’s it guys, as I said it was quite short but I wanted to talk about this cause I haven’t seen anyone talking about Hawkins recently

Tell me what you think about it !