Many theorist like me believe Kaido to reasonable guess that he has a power that relates to Dragons because of the fact that he has appearances relating to dragons such as his Moustache and his Dragon Scale like Tattoo. 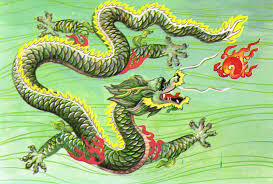 Many have speculated him to have gain his powers from either a Devil fruit or a Smile Artificial fruit, but i believe there is another way he could of obtained a power of a Dragon, but before i go through it i’d like to state the reasons why Devil fruit and Smiles are inconceivable.

Devil Fruit:
It’s quite obvious that Kaido is not a Devil fruit user as it’s been mentioned in the manga that Kaido rules in Land, Sky, and importantly to know the SEA. It’s clearly indicating that he must not be weak in water in order to be dominant in the sea. If so, Devil fruit is out! knowing Devil fruits are weak when it comes to water.

Artificial Devil fruit:
I can’t really say the evidences to disprove this one just now, but later as you go deeper into my theory you’ll understand why this one isn’t it aswell. However i will say that because artificial df is a copy of the original, it would make more sense if it also receives its drawback to water.

Now on to the Theory!!

In the Beasts Pirates those with tattoo’s called the Gifters are seen to have powers to transform into a zoan like being, however unlike Kaido’s Tattoo’s his are completely different, but comparing it to Hody’s tattoo they both share similar appearances as they both show a similar skulls and an image which might be representing their granted powers. Now, Hody uses steroids to enhancing his Strength, Speed, Water manipulation, and giving him the ability to be feared by the sea beasts including the ability to order them around. Because his tattoo looks to depict his granted powers and abilities of Sea Beast like powers from his steroids it leads me to believe the steroids he is consuming comes from the use of Sea kings beasts, allowing him to be more dominant in the water.

Having mention those I believe Kaido also uses Drug Enhancements, which in this case he specifically consumes steroids created from Dragons in my belief because of his dragon scale tattoo, like how Hody’s tattoos represent his granted steroid abilities of a Sea Creatures.

In the Chinese Dragon mythology it was believed that dragon bones can be used to create an elixir of immortality, granting the consumer to be immortal, they are also known in their legends for being either Immortal or Mortal, but with incredibly hard, nearly-unpierceable skin including long length of life, explaining many of the feats of using dragons for Kaido’s enhancement steroids.

This steroids granted Kaido to have nearly-unpierceable skin including, unbelievable strength and speed, including long length of life, which undo the effects of the steroid to shorten his life span. Like Hody he will also be Feared by Beasts mainly Dragons and the ability to order them around like a king, explaining his given nickname King of All Beast.

As stated by Kinemon Wano has Dragons as it might be where his stariods originated from and how he was able to conquer Wano Kingdom.

One More thing to add is his mood swings personality, they shares similar personality side effects of real life enhancement steroids.

Thanks for reading my theory!

*Theory by Enel One Piece Theorist