The Big Mom Pirates are a powerful pirate crew. The crew’s captain is one of the Yonko, Charlotte Linlin. They serve as one of the central antagonistic groups of the Pirate Alliance Saga and Yonko Saga. Their base of operations is Whole Cake Island.

Captained by one of the Yonko, it can be presumed that the Big Mom Pirates are incredibly strong. One of their members, Bobbin, was powerful enough to pillage an entire country with only a handful of men, and Pekoms, a member with a bounty of Beli330,000,000, single-handedly defeated Caribou, a Logia user and Super Rookie, on his own and with a single attack. It was said that if an island does not pay its tribute she will destroy it using her army of “monsters”.

Furthermore, Linlin has several islands under her control, and the citizens of Fishman Island, fearing her wrath, agreed to produce the ten tons of candy she orders every month. It is common knowledge to everyone in the New World that Big Mom’s “invitation” to her tea parties is in name only, and that it is a summon order that, if declined, would result the invitee to be choked with regret. Refusal would result in the invitee being sent a box containing the head of someone they personally know, even if that person is someone of notable strength or in another part of the sea beyond the Calm Belts and Red Line, demonstrating how far reaching the crew’s power is.

They also have multiple ships and allies, some of which were sunk by Eustass Kid. After Whitebeard died, the Sun Pirates apparently joined with them so Fishman Island would be under her protection, which increased the Big Mom Pirates’ power. Jinbe, however, is not really loyal to her and is thinking of leaving her. Also Capone Bege, a rookie pirate captain from The Worst Generation has aligned with the crew. A Single “Road Poneglyph” is currently within the possession of Charlotte Linlin and her crew.

Big Mom has also aligned herself with the Patriarch of the Vinsmoke Family and through him she has access to the Germa 66 who are said to be a an evil mythical army.

The Big Mom Pirates’ Jolly Roger is a skull with thick lips and wearing a pirate tricorne based on their captain’s appearance, on a fluffy background (which could represent Linlin’s hair in some fashion) with several candy canes crossed behind it (one on the right, three stacked together on the left), in place of normal crossbones. A tree is seen coming out of the cane on the bottom right. 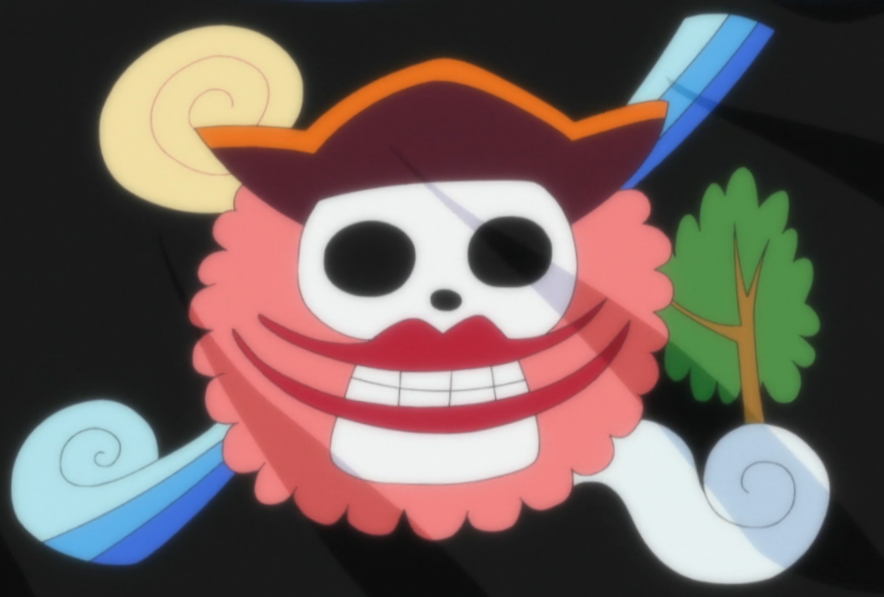