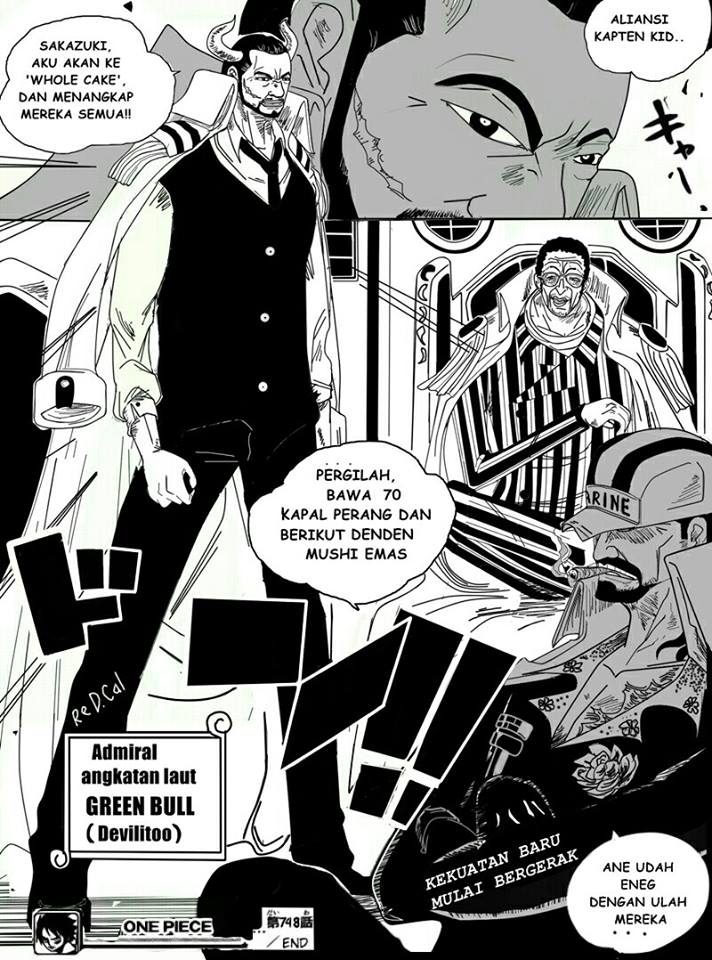 Note: this theory is based on the assumption that Jinbe will join Strawhats. This theory is something I thought of after reading a comment about Ryokugyu as an admiral and how he could be.

Personality: We have so far seen many types of admirals in One Piece, what is missing is the crooked cop, the corrupt admiral that encapsulates and symbolizes all that is wrong with the marines. We have seen corrupt marines in the series so far (Nezumi, Morgan) which means its completely possible that higher ranking officers also are corrupt.

This would also fit well considering how the different admirals have their own justice:

Powers: Green is commonly associated with nature and earth and therefor I am going to assume that his powers is related to this. (Which type of power is not relevant just that it is related to earth)

Showdown: The reason I think this is a very possible theory is because his characteristics would fit extremely well in the following scenario. If we look at the latest opening in One Piece you can see the Strawhats taking on the admirals. Luffy vs Fleet admiral Sakazuki, Zoro vs Fujitora and Sanji vs Kizaru. Their powers match each other very well so in a final arc these are battles that likely would occur. This however means that the Strawhats will have to fight Ryokuyu too. The perfect opponent to the corrupt admiral would be Jinbe. As a fishman he have had to suffer the tyranny of mankind and the World Government. And to have a final showdown between the fishman and the man who who abuses the system that have been oppressing the fishmen would be very fitting. Even their powers would go well. Water vs Earth which also could be a symbol for the fishman vs human battle since the elements represent the habitats the different races live in.

TLDR: Ryokugyu is a crooked cop like those in every action movie.

Thank you for reading this excruciatingly poorly formated text and I would love to hear your opinion on the matter.

*All rights go to sirnorthcountry

admiral Jinbe one piece Ryokugyu theory 2015-03-16
admin
Previous: ONE PIECE Ranks No. 2 in “Which Series You Don’t Want to See Get a Live-Action Adaptation?” Poll
Next: Dofi Family