Hi guys i’m here to discuss about Brook, what i think was the inspiration behind the character and what possibly could be his awakening 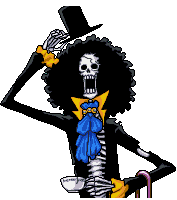 Even to those who follow Voodoo the Baron is seen as a dangerous spirit, however he can also be a powerful guardian if the mood suits him – due to the sudden changes in his mood and the Western world viewing Voodoo as a “black magic” he has been labelled both a demon and a god, depending on one’s view of the world.

He is usually depicted with a top hat, black tuxedo, dark glasses, and cotton plugs in the nostrils, as if to resemble a corpse dressed and prepared for burial in the Haitian style. He has a white, frequently skull-like face (or actually has a skull for a face) and speaks in a nasal voice. He is a sexual Loa, frequently represented by phallic symbols and is noted for disruption, obscenity, debauchery, and having a particular fondness for tobacco and rum. Additionally, he is the Loa of sex and resurrection, and in the latter capacity he is often called upon for healing by those near or approaching death, as it is only Baron who can accept an individual into the realm of the dead

For three days and three nights, Brook flew through the sky from being pushed by Kuma’s attack. On the fourth day, he landed in the country of Harahetternia in Namakura Island. However, the skeleton had landed right in the middle of demon summoning ritual done by some cultists prepared to lose their souls to Satan in exchange for revenge against the Longarm Tribe.

Baron Samedi is the leader of the Guédé, Loa with particular links to magic, ancestor worship and death. These lesser spirits, all dressed like the Baron, are all as rude and crude as their master. They help carry the dead to the underworld.

As well as being master of the dead, Baron Samedi is also a giver of life. He can cure any mortal of any disease or wound, if he thinks it is worthwhile. His powers are especially great when it comes to voodoo curses and black magic. Even if somebody has been afflicted by a hex which brings them to the verge of death, they will not die if the Baron refuses to dig their grave. So long as this mighty spirit keeps them out of the ground they are safe. He also ensures all corpses rot in the ground to stop any soul being brought back as a brainless zombie. What he demands in return depends on his mood. Sometimes he is content with his followers wearing black, white or purple clothes or using sacred objects; he may simply ask for a small gift of cigars, rum, black coffee, grilled peanuts or bread. But sometimes the Baron requires a voodoo ceremony to help him cross over into this world.

Awakening According to Doffy-some people’s Devil Fruit abilities could awaken in rare circumstances and give them the ability to not only manipulate their body, but their surroundings as well.

According me what Brook’s awakening should be