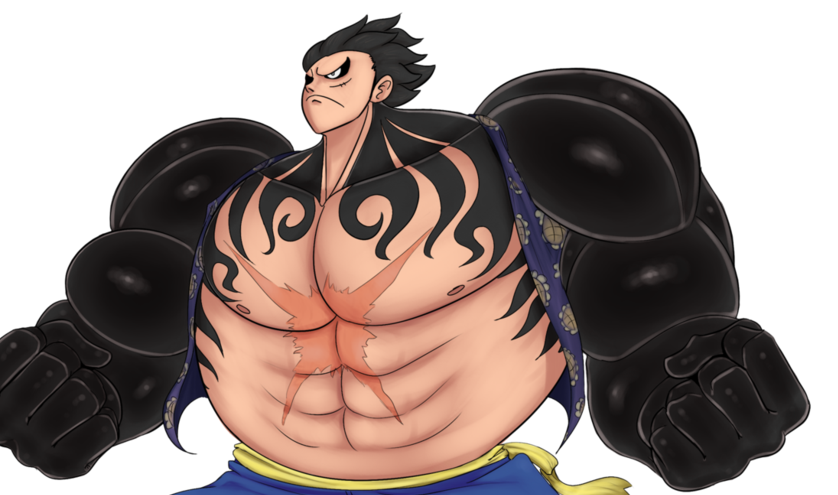 I am going to give my thoughts on Haki usage and its limitations. Please bear with me, it’ll be a long read.

So let’s start with the basics, we need to know a few things before I can actually give this my thoughts accordingly to canon information. What is Haki, or more specifically, what is Busoshoku Haki? Secondly, what does it use to manifest itself? And lastly, how can one increase his Haki powers?

All these questions are based upon Luffy’s Gear 4th. Most of us want to know how Gear 4th could be improved in the future, as the latest chapter, chapter 786, showed us that Luffy needs his Busoshoku Haki to stay in this form. We have also seen it will take 10 minutes to recharge, thus comes the third question. To answer these questions, question 2 is the most important one to note in this case. If we know how it manifests itself, then we can predict how Luffy is able to improve his Haki in the future.

Let’s begin with the first question, shall we?

What is Busoshoku Haki?
Right of the bat, we need to know what this type of Haki actually is. We know we have 3 types of Haki, but as far as we know, Luffy only requires the use of Busoshoku Haki to maintain his Gear 4th.

Now then, what is Busoshoku Haki?

Also known as Armaments Haki, Busoshoku Haki grants the user to create a type of armour around them. The Haki allows the user to increase the power of his attack and even can create fire in Luffy’s case. The Haki can nullify Devil Fruit powers, may it be Logia, Paramecia or Zoan. The Haki can also be used on inanimate objects, like swords and guns (and even bamboo sticks). It can also coat bullets, which oddly stay embodied with the Haki even though the user doesn’t touch it. Quite impressive. Would be a nice topic to talk about in the future, wouldn’t it?

Fine, now we know what the Haki does, it would be nice to know what is uses to manifest itself. And no matter how much googling I did, it always came down to 2, not 1, things. The most obvious of these two is Willpower. But now it gets more… interesting.

The second power it needs to manifest itself is lifeforce. Now, as a dumb non-English speaker, I was wondering if there was a difference between the two. So once again, on the the deep web. To keep it short, it is not the same as willpower at all.

This lifeforce has many levels to it. Some of which were quite stupid to be included in One Piece, but there was 1 that caught my eye. May I present to you my best friend since 5 minutes ago, Qi!… Okay that was stupid. Anyway, back to my point. Qi is one of the many elements to lifeforce, one that actually focusses on one’s energy flows. The more a person understands this rhythm, the better this energy flows through one’s body. “Oh boy,” I thought to myself, “could this be one of the improvements Luffy has to make to maintain his Haki even more?”. The answer is… No clue at all.

You see, One Piece’s canon information only gives us that Busoshoku Haki manifests with Willpower and Lifeforce. Since we are not given what type of energy influences lifeforce, or let alone what Oda means by lifeforce, we can not determine it is in fact Qi that does the job. That is why this mystery is so hard to crack. However, since it is a theory, let’s just give it a quick thought.

Now let’s say Luffy’s main drive is indeed Willpower (and has yet to discover his potentional lifeforce), can he improve it by understanding his energy rhythms? No, he can’t, this Haki will stay like it is now, BUT! He can expand the long-term usage of it. You see, when it came to Gear 4th, he was given a timelimit to regain his Haki (very vague since we do not now if he only specifies that he needs to regain his Busoshoku Haki in those 10 minutes, but to be fair, all Haki are driven by the same force, so let’s just go with that). Now this timelimit rang a bell. What if his Haki isn’t like we thought it originally was after we saw how Luffy can not use his Haki for a set period of time?

Reader: “What are you even talking about?”

Let me get into it.

So I have mainly seen thoughts on Haki which all came to one point, storage. How can Luffy save his Haki for his Gear 4th? I want to scrap that and give a brand new thought. What if Haki was a force that can be used for only a set time period whenever activated and has to forcefully deactivate to retain its energy rhythms, which causes it to be unusable for a set amount of time?

The main idea behind this is that characters like Luffy, Doflamingo, Law, Sabo, etc., do not have this Haki storage, but rather a timelimit. To back up this thought, remember, why does Haki never run out? Because it never hits the time limit. The storage would assume it would run out after a couple of days and needs to restock, at least, that is what I think. That restock idea with the storage doesn’t make sense. How can you run out of lifeforce and willpower at the same time?

A timelimit based on willpower and their lifeforce would make sense to me. Haki uses energy from the lifeforce, like Qi, that would interrupt the energy rhythm. Willpower will also determine your amount of time you can use it. I have not found a solid translation on willpower, nor did I find a great definition of it, however, as far as I have seen in One Piece, it is determined on how much you want something, or how much you want something to happen. I want One Piece, I risk my life for it and I will until I have found it. I want to protect my friends, but before that happens, I need to train myself. Etc.

Now this causes a problem. Eventually, your willpower will diminish. For example, we have found One Piece so I do not have to risk my life for it again, etc. This will weaken your Haki, which is why this lifeforce is so important. If you have greatly managed your Qi in a way that the interruptions in its energy will diminsh very slowly, you will have more time to use it, even though your willpower is not as strong as it used to be. Now, this may sound like a load of crap, but it can honestly happen.

Now before we go on to an example I purpose to you to think about, let’s answer question 3, how can Luffy actually improve Gear 4th? I think he can with two things:

1. Luffy yet again gets a great impact on him (not a death but something that makes him realize that he is still not good enough). I was thinking of an utter defeat of his crew and a narrow escape (sounds like an arc we have seen before the timeskip…) or, if absolutely needed, the death of a dear friend (maybe Jimbei). As long as Luffy finds a motive to once again want something, then his Haki can be improved. Highly unlikely, but a possibility nonetheless.

2. Luffy needs to understand the rhythms of his energy. If he does so, he can gravely improve his Haki usage. I think it is a great backup on his willpower and fairly plausible as well.

Let’s look at arguments people will use against this… Actually, I could only think of one:

Law said in chapter 785 that he is using too much of his Haki. How can this relate to your theory?

Quite simple actually. The more Haki you use, the faster the energy rhythms will be interrupted and blocked for a set amount of time. People like Vergo who go Full Body Busoshoku Haki will run out of time faster than Luffy does with his Red Hawk. Law’s statement also backs up my theory. This is no limitation to Strawhat only, it is a limitation to all of the Haki users in One Piece. Law knows this, as well as Doflamingo, who not only tried to understand Gear 4th, but also did something very obvious during his fight with Luffy.

The moment he was knocked into that wall, he knew it was best to wait a while until Luffy ran out of time to use his Haki. at that moment, Doflamingo could finally finish Luffy like he should have, that was his plan all along… until gladiators started to back up Luffy, whoops!

Long story short, I believe Haki is not a ‘storage-able power’, but rather a timelimit-type power. The user can only use his haki for a set amount of time. The more he uses it, the quicker the time runs out. This is based on the person’s amount of Willpower and the amount of control over one’s Energy Rhythms (Qi).