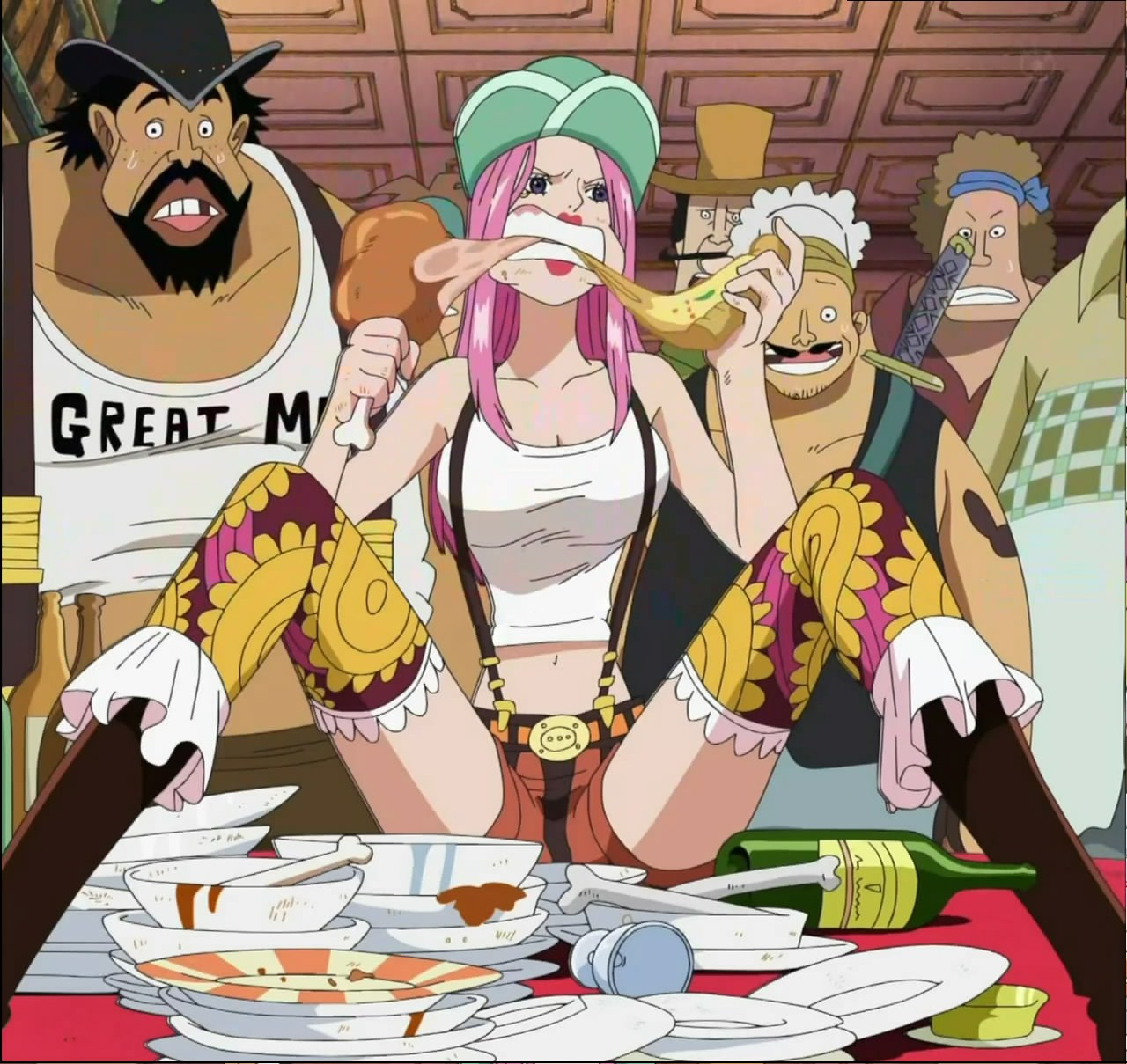 Alright i’ve been pondering to this theory for quite a long time now and i think i’ve come to a reasonnable theory about Jewelry Bonney’s true identity.There have been many theories about her and mine is not fully original: because she joins many others in a certain way.

As we all know, Bonney’s Pink hair can remind us all of Laura from Thriller Bark. When she has parted ways from the SH she gave Nami a Vivre’ Card from her mother who’s a great pirate in the new world.
(yeah yeah we all know that ! Go straight to the point ! > Knowing how Oda likes to create links between character we can all assume two thing :
– First Laura’s mom is the Yonkou Big mom (nothing new to learn here captain ! go on!
– Big Mom’s daughter are encouraged to travel the world by themselves and not under Big Mom’s mark (at least she did not seem to be forced to do anything but travelling back from the new world seeing how she got to water seven : p )

BUT (here’s the tricky part ^^ ), We all saw during the Shabondy’s ark that Bonney had a devil fruit

(similar to Ain’s unless Ain’s devil fruit is similar to Bonney’s?… Oh … the theory read what comes next ! )
Allowing her to change the age of her enemies (turning them into old people or babies ) but also changing her age at will (giving her a lolicon look ). So we can also think that her casual appearance may not be the one according to her real age (she’s older than she looks like) She seems like one of the wisest pirate between the supernovae : she saved Zoro from killing a Celestial Dragon but also holds a strong grudge against the Marines… She was also the only one to cry when learning about Ace and WB’s death and she then ran into BB’s crew on the burning island.

Then I saw another interesting theory : Bonney may be a former member of Gol D. Roger’s pirate crew due to her Name : Jewelry. Actually it’s brilliant ! The captain was Gold the second was Silver and the third most powerfull pirate was Jewelry (forming the three of them a monster trio )

What would happened if those two theories were actually partly true ? My theory is that Jewelry bonney was actually Charlotte Lilin’s Twin sister. they looked quite alike at the time but Jewelry’s fruit allowed her to lose a lot of weight. At some point she actually met Gol D. Roger looking for member to join his pirate Crew and she accepted leaving behind her sister

Together they may have lived great adventures. but when Roger died she decided to hide for some time until she decided to get back into business. With her devil fruit she was able to hide her true identity and have a fresh start.

But i can guess what your main argument against this theory will be : “Why isn’t she simply BIG MOM 3

? Well it’s quite simple if you’re up to date with the last chapter’s out ! We saw her react to Doflamingo’s defeat and Big Mom is currently eating desert on her main island while we’re talking actually and she wouldn’t thank the SH who just happened to defy her a few days ago.

My last argument will be that her link with Roger would also explain the Marine tracking her (by sending an admiral toward her (and BB’s crew ) if she just was a simple high bounty pirate they wouldn’t have send an army to get her she’s important ! and even tough they send her such a comitee we saw recently that she managed to escape and hide somewhere in the new world for two years !

Long story short (for the people who don’t like to read long theories ) : I think that Bonney is a former Roger’s pirate member (and was part of a similar monster Trio ) and also Big Mom’s sister. She hided from the marine by changing her age with her Devil fruit and decided to get sail once again (for an unknown reason)

So what do you people think about it