Ever since Kaido was mentioned, several theories regarding his powers have surfaced all over the internet. The most popular ones being:

I have always been switching between Oni and Dragon every time we get some new information on Kaido.
When he first appeared in the manga (Chapter 795) an idea struck my mind…what if he is both an Oni and a Dragon…let me explain.

I will provide reasons for why I think this way in this post.

Before I can explain anything, I would like to mention that when I say Dragon, I mean a Japanese or Chinese Dragon only (I don’t know the differences between them, but I know that they are very very similar) and for those of you who don’t know what an Oni is, it’s pretty much the Japanese Ogre. A demon like mythical creature in Japanese folklore.
They are characterized by their enormous size, demon-like horns, an iron club they’re usually depicted carrying. As depicted in a video game: 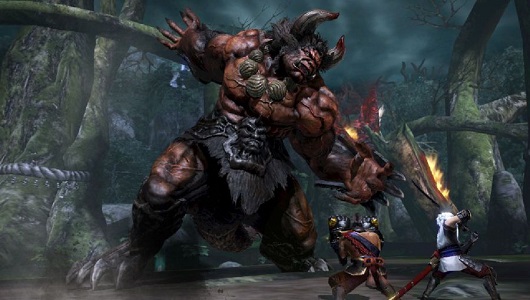 And here is Kaido: Notice the similarities right? Monstrous appearance and size, fuzzy hair, horns and in Chpater 824 we got confirmation that Kaido uses an Iron Club as well. The similarities point strongly to the fact that Kaido is quite possibly an Oni.

Here Kaido is seen carrying and using an Iron Club.

These ‘clues’ are what convinced me that Kaido is an Oni.

Then what about the Dragon Mythical Zoan part?

In the above manga page, Kaido said his dream was to have an army/crew of only Devil Fruit users. So it would make sense if Kaido himself has a Devil Fruit, right?

With his appearance, we saw that he has a very very long mustache and some sort of (Dragon) scales on his chest and arm.. This could be hinting at his Dragon powers.

Why the mustache? Japanese dragons are depicted having long whisker like appendages on their upper lips The scales on Kaido’s chest do resemble the scales on this Dragon (Ryuu) don’t they? And in the anime preview of episode 739, we see that his scales are reddish in color

So I’m well convinced that those scales are Dragon scales.
His mustache would become the appendages on the Dragons face and his scales will become the scales of a dragon.

Putting these two things together, we have Kaido, an Oni who ate the Dragon Mythical Zoan Devil Fruit!