Best change in One Piece so far 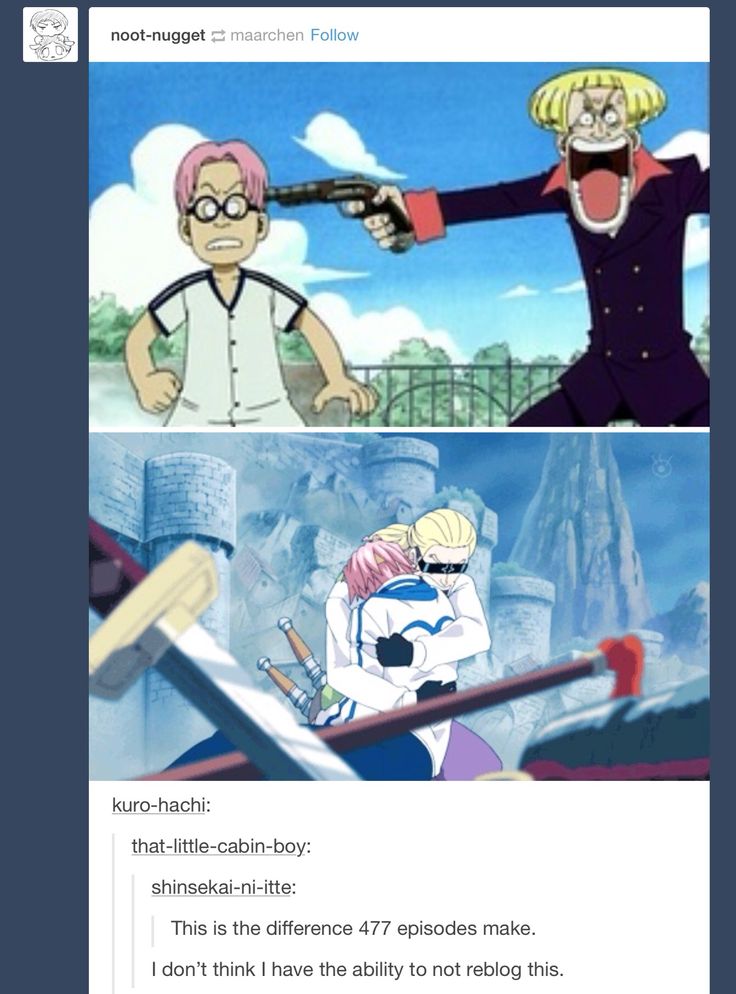 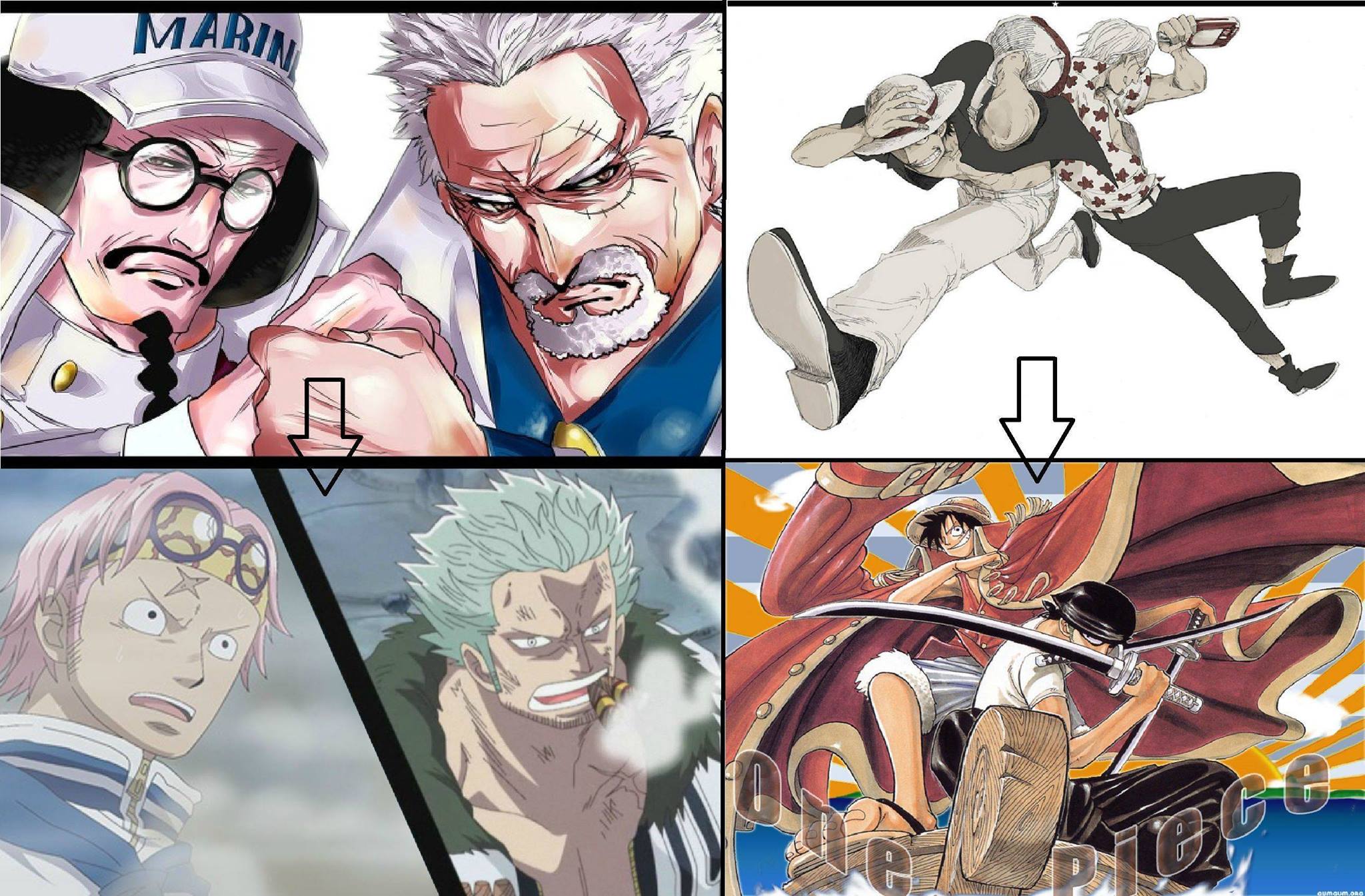 Weird Ways One Piece Has Been Censored

They took out all of the blood, all of the girls cleavage, all the cigarettes (Sanji has lollipops instead!) and even the beer and wine! XD

Here are some edits by 4kids: 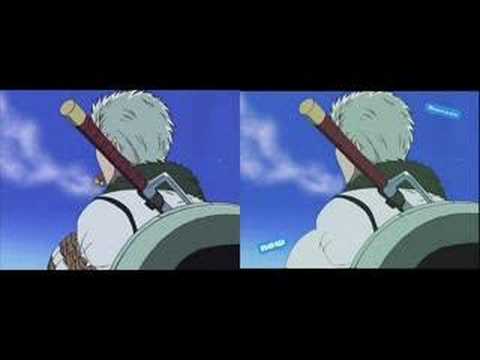 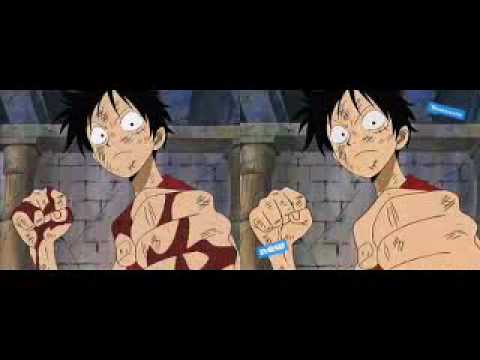 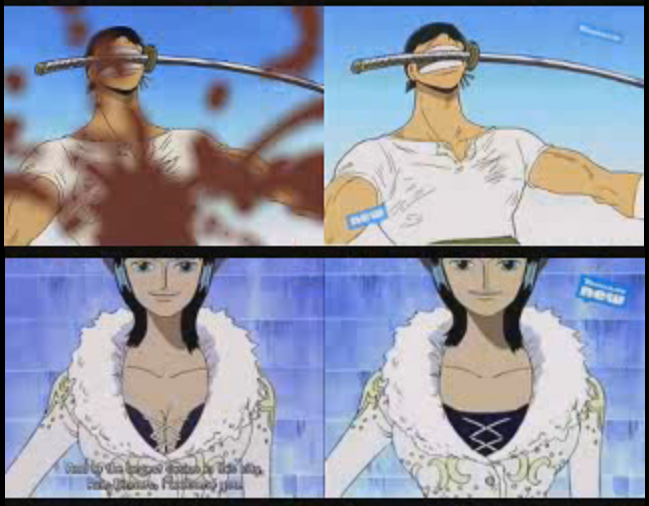 This is the very beginning, do you remember it? :3 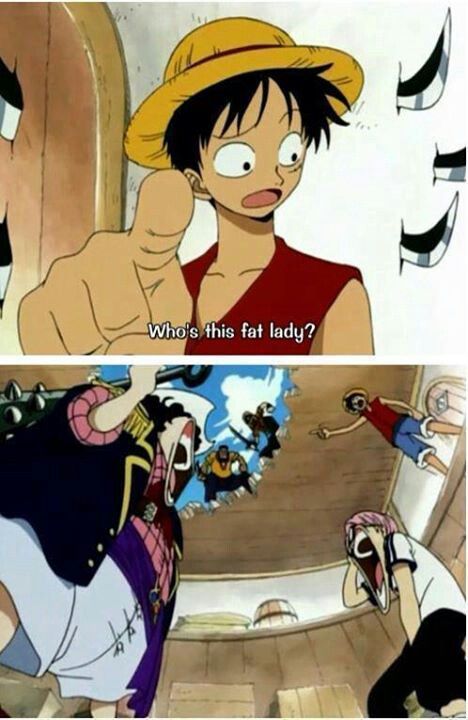 Do you remember this scene? :3 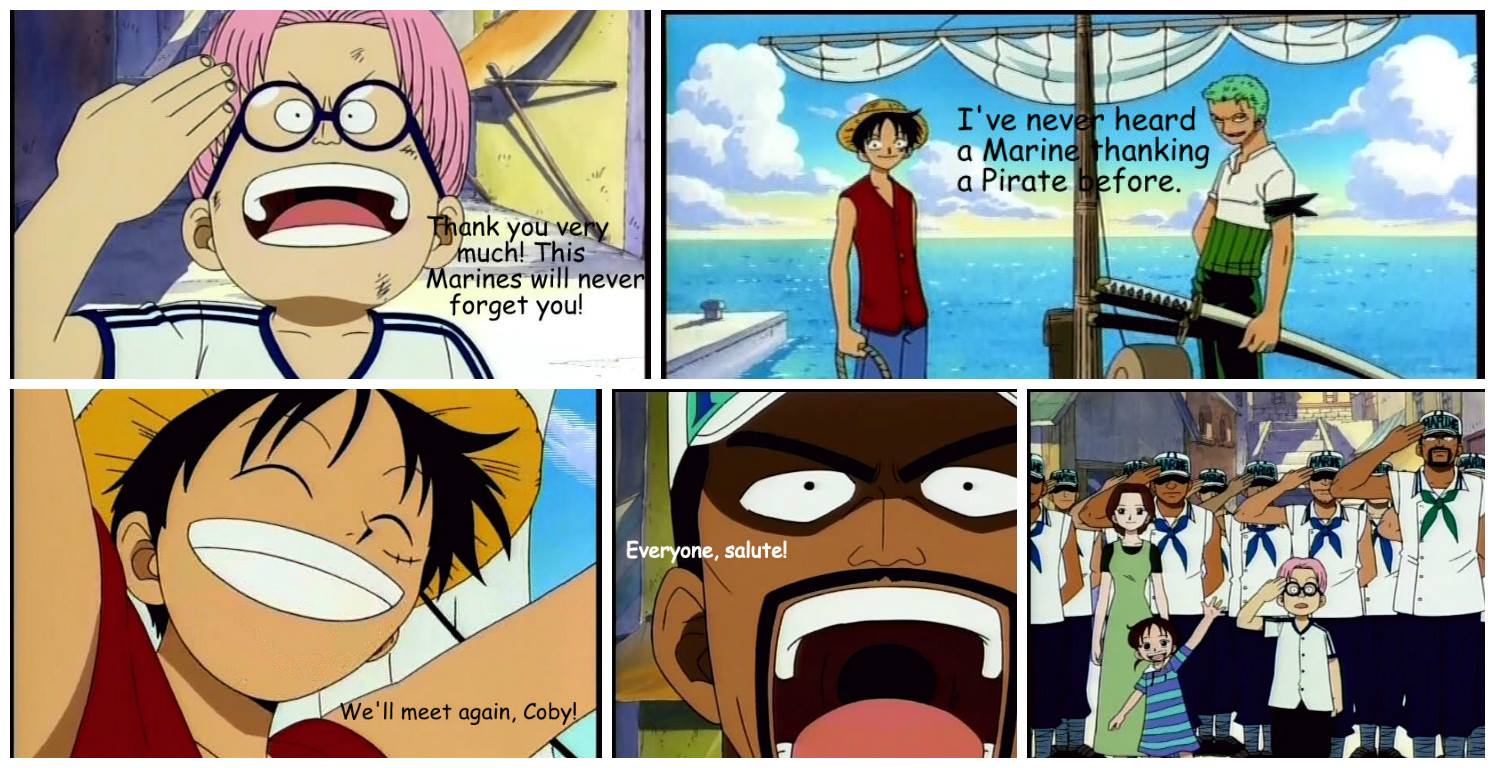 THE FALL OF KIZARU

I feel as if Kizaru has to fall.

The new beating the old has always been a theme in One piece and i feel as if younger marines such as Coby, Sentomaru, and Smoker will eventually grow to surpass Kizaru and the rest. For this reason, i believe Kizaru will be defeated and replaced. But how will that happen? Well i believe that the key to defeating Kizaru is to utilize his DF’s weakness, that being invisibility. So how does invisibility counter light? Well an object is invisible if light bends around it without touching the object, this is true as you can only see an object because light bounces off that object and hits your eye, if light bends around it without touching it, you wouldn’t see the object. This is why i believe the Suke Suke No Mi is Kizaru’s natural enemy. So will Absalom defeat Kizaru? NO, Kizaru still has haki and his speed so there’s no way Absalom could defeat him; however if the Blackbeards got a hand of his fruit, then it is a huge possibility that one of the blackbeard pirates will defeat Kizaru. Furthermore i think the Suke Suke No Mi’s invisibility could inspire Sanji to create his own invisibility to defeat Kizaru. We know Sanji wants to be invisible, invisibility counters light, and Sanji will likely fight Kizaru as they both are fast kickers; because of this, i believe it is very likely that Sanji will become invisible. But how will he do this? Well i believe it could be done by utilizing CoA

Here it appears as if Rayleigh could stop the elephant without touching it, is this the true strength of CoA? I believe so, i think that CoA could potentially be used to create invisible barriers. With that being said, i think Sanji could use CoA to bend the light around him without it touching his body, thereby making him invisible. If he were to do this, Sanji would be immune to all of Kizaru’s non-haki moves as lasers would simple bend off his body. This would be a major disadvantage for Kizaru as he relies on his DF a lot(as stated by Zephyr); this could potentially give Sanji the upper hand and allow him to defeat Kizaru.

One Piece Personality Type Chart: Who Are You? 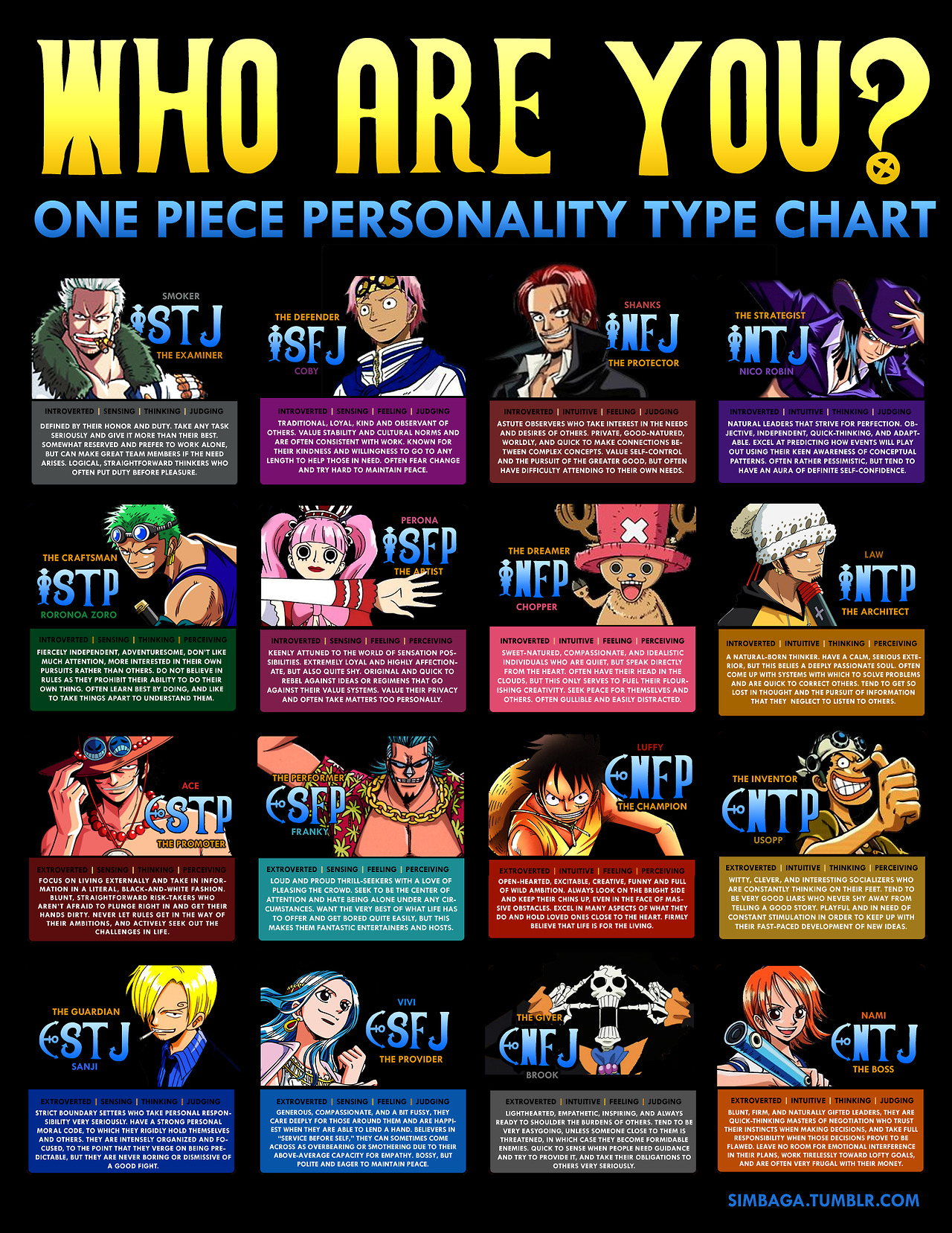 Garp and Dragon’s past? 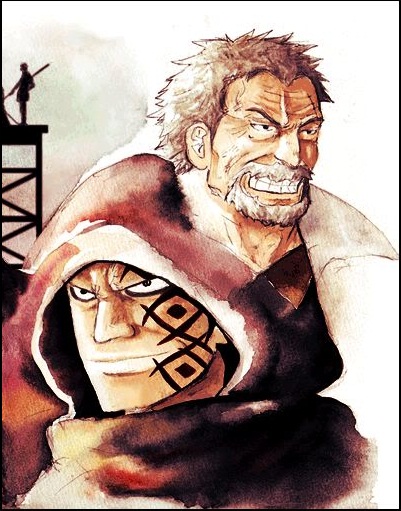 Let’s start with how Garp raised Luffy(which probably was the same way as he raised Dragon). He trained Luffy to become strong in order to become a Marine but Shanks made Luffy wanting to be a pirate instead. Dragon however didn’t have that someone and might instead actually become a Marine. He is feared for the WG and is the criminal who is the most wanted.

This is where I got when I started to search around to find more things that I could connect with Dragon and I found something very interesting. So basically there’s a myth about a king having 4 followers who followed him. Each one of them had a different shape, one was like a dog, the other one was like a monkey, there was a pheasant and last a bird. The dog was very loyal to his king, the monkey was always goofing around and never understanding something, the pheasant was a lazy one while the bird was the guy who saw the evil in the king and decided to leave him. Now those first three sound similiar, almost TOO similiar to the 3 Admirals(Akainu, Kizaru and Aokiji). But what about the fourth one? The guy who left his king could also been a former Marine or an admiral. I think that someone is Monkey D Dragon which saw the corruption with the World Government that he decided to create the Revolutionary Army. I am still not sure about being a former Admiral but I would definitely say that he was a very strong Marine in his former days before realizing the truth about the World Government.

Now switching over to Garp. We have a question that we all want the answer of and that is why isn’t Garp an admiral? He is obviously strong enough and have been getting an offer tons of times but rejecting them all but why? I think the reason is because he had a family member getting killed by a Celestial Dragon and if he became an admiral then he had to protect them and being ”called” when someone hit them. Since Luffy’s mom is alive(Oda have confirmed this in a SBS) I think the person who died was his wife, Dragon’s mom. This or the former theory could be the reason(or why not both) why Dragon created the Revolutionary Army and why Garp always declined the promotions he got. Even Garp as a marine knows how much of a scum the Celestial Dragon are and he refuses to help them by protecting them.

Another thing I want to discuss is why Garp even became a marine in the first place. I couldn’t find much information about this and kept rereading his parts but never came up to something until I realized that maybe it’s not something too deep but rather a simple reason to why. We saw how pirates invades all sorts of towns and cities in order to steal the treasure and kill the civilians and Garp might have experienced this hoping to end it with being a Marine. He wants to change the whole system as he saw and want to catch the bad guys, a little like how Coby wanted to become one.