Which Team Do You Pick?

13 Things You Should Know About Trafalgar Law

Trafalgar is the name of a cape in the south-west of Spain. Its name is Arabic in origin, meaning “Western Cape”. It was the site of a famous naval battle between the British and the French/Spanish fleet during the Napoleonic Wars, dubbed the Battle of Trafalgar. London’s landmark Trafalgar Square is named for the battle, as is a class of submarines in the British Royal Navy.

“Water Law”, as well his fight with Wellington, may be a reference to Waterloo, the place in where, on 18 June 1815, was fought the final battle of the Napoleonic Wars which represented the ultimate defeat of Napoleon at the hands of the Seventh Coalition. The British commander at Waterloo, Arthur Wellesley, was the duke of Wellington.

Law’s birthday, October 6th, is a reference to his name, as to can mean 10 and ro can mean 6,Torafarugā Rō. He shares his birthday with Tashigi and Bartolomeo.

When Brannew introduces the Shichibukai in the Chapter 700, Law is credited as “the mastermind behind the Rocky Port Incident“. No information about this event has been revealed so far.

His wanted poster shows Bepo appearing in the background with his head turned in the same position and stance as Usopp in Luffy’s poster.

According to the 4th Japanese Fan Poll, Law is the 10th most popular character in One Piece, making him the most popular Supernova excluding Luffy and Zoro.

In the 5th Fan Poll, Law finished in 2nd place, making him the most popular non-Straw Hat and Shichibukai.

At 26 years-old, he is the youngest individual known to ever hold a position as one of the Shichibukai.

Law uses the “smiley” style of Jolly Roger, as first seen used by his former superior Donquixote Doflamingo. But unlike Doflamingo’s smiley, his does not have a “cancel” sign across it. The smiley most likely refers to the final moments of Donquixote Rosinante, who died with a smile before he told Law to remember him smiling from that day onwards.

Buffalo mentioned that Law was in line for “Heart seat” as Doflamingo’s ally. The vacant seat was later seen in Chapter 700, along with the occupied Spade, Club and Diamond seats.

Law’s character song, which was released as a bonus song on the One Piece Log Collection – Sabaody CD is called Dr. Heart Stealer. This is likely a reference to the hearts of 100 pirates he obtained in order to become a member of the Shichibukai or his ability Mes which he used to remove people’s hearts from their bodies.

Law’s dislike of bread is shared by Donquixote Rosinante.

Which is your favorite Law’s suit? 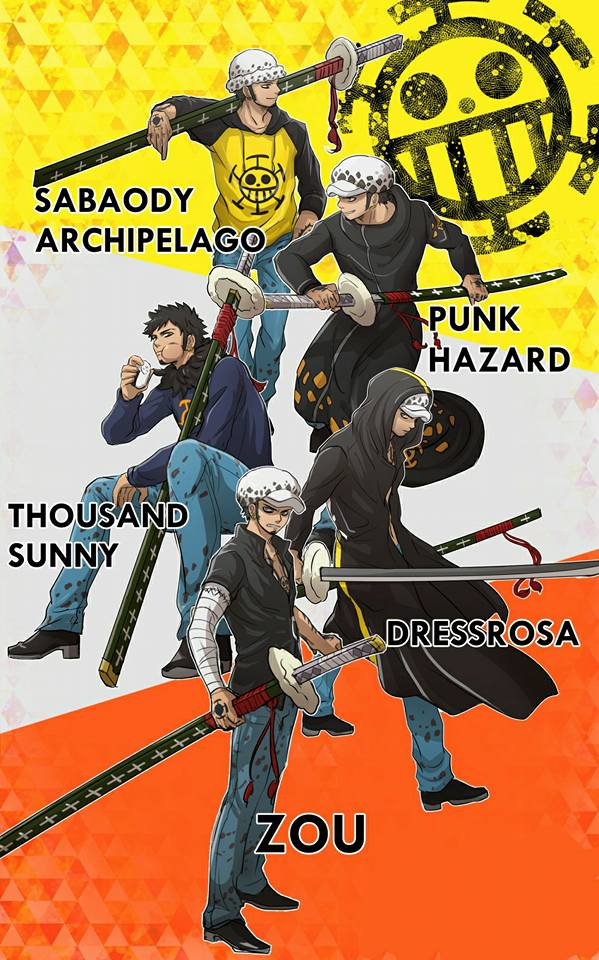 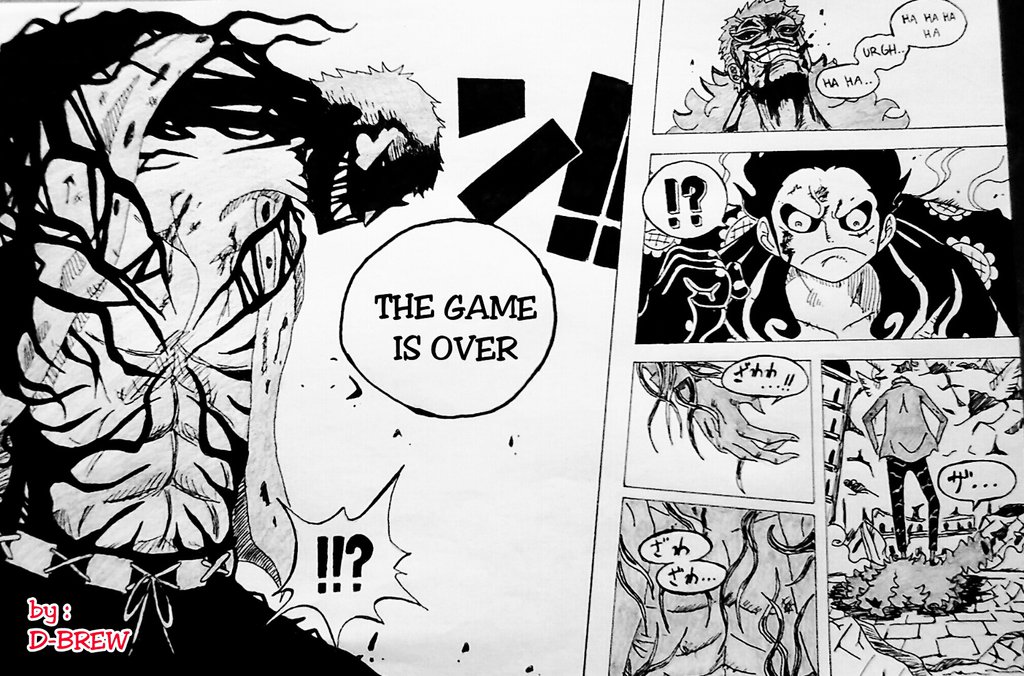 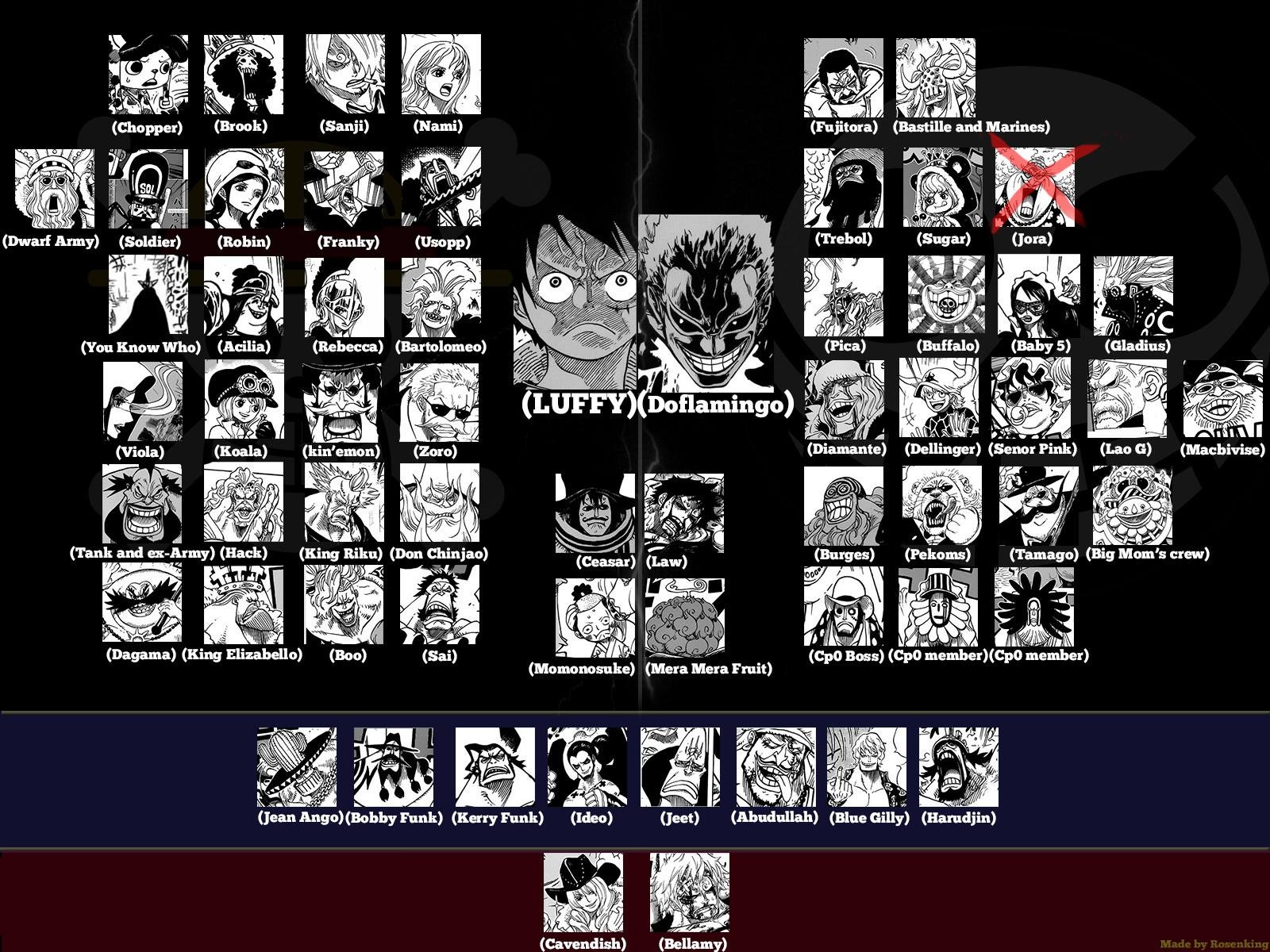 Since the beginning of the Dressrosa arc, everyone has noticed that Doflamingo’s never takes off his glasses. In fact, we have never seen him without them, even in flashbacks as a young pirate or as a child, he always wore glasses. Because of this, a lot of questions and gags have popped up considering his eyes, what they look like etc.

But, what came to my mind is that he’s wearing them to cover up something, namely, that he’s blind in one eye.

If we look at his Jolly Roger, we can see that there’s a line across it’s left eye. Jolly Rogers usually represents the captain (Shanks’ Jolly Roger shows the scar his has around his eye) and we’ve seen Doflamingo’s sinister smile, so what about his eye?

Also, we have seen him wear glasses as a child, but that may have been just for fashion. After his father abandoned that title of a Celestial Dragon, they were attacked by the citizen. They were tied up with rope and their eyes were covered. There were tortured by people who wanted revenge. People wanted them to suffer. There was a man who said that he was blinded by the Celestial Dragons. Because of that, I believe that the citizen tried to blind Doflamingo (that would explain why their eyes were covered) and that he is blind in his left eye since then.

Since he is blind in his left eye, he wore glasses to cover it up. He became a pirate and if someone knew about his eye, they would use it to their benefit, like attacking from his blind side.

Another piece of evidence are attacks that were launched against Doflamingo. When he was fighting Sanji, Sanji attacked him and the attack came from the left side. Doflamingo turns 180° to block Sanji and struggles a little which is strange because Doflamingo is a lot stronger than Sanji.

When fighting Luffy, Luffy’s Red Hawk came from the left side too.

Also, Law’s attack Gamma Knife came from the left side as well.

He should have been able to avoid or at least block these attacks, but if he’s really blind in his left eye, that would explain why he didn’t.

Also, some will say that he can’t be blind because we saw one of his eyes, but we only saw his right eye and not his left eye.

He may even have a scar on his left eye and maybe because of that Corazon draw something on his right eye, in order for his brother to not be the only one.

*All rights go to the maker of this theory.