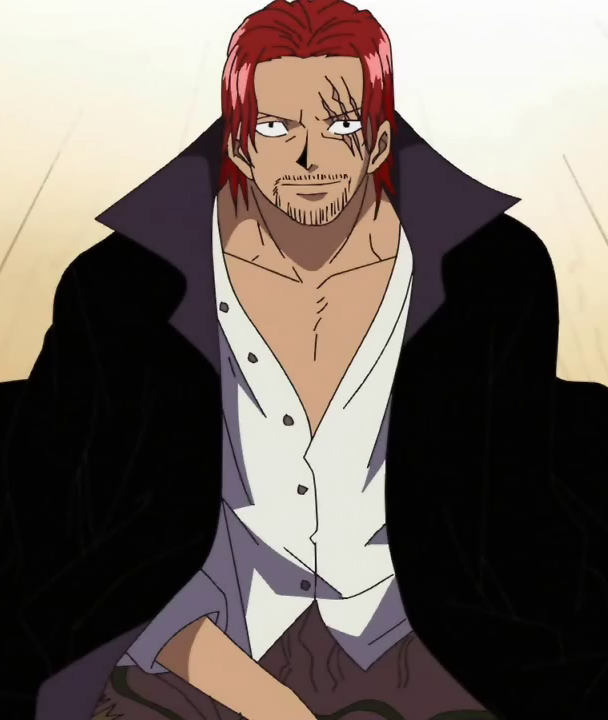 Shanks Le Roux is the captain of the Red-Haired pirates, and one of the members of the Four Emperors. The man who inspired Luffy to be a pirate. Seen as the man who inspired Monkey D. Luffy to follow his dream to become the King of the Pirates. He gave Luffy his treasured straw hat as a promise between them that he would one say become a great pirate and return it to him.

Shanks is easily recognized by his red hair and three marked scar over his left eye. A mark that was given to him as a young pirate by Blackbeard. He also lost his left arm to a sea monster when saving the life of young Luffy from drowning. He has a rather bohemian appearance for a captain of a whole pirate crew. Always wearing a white unbuttoned and untucked shirt, long patterned shorts, sandals, and a draping black coat over his shoulders.

Shanks primarily fights with a single sword, but is also known to use the ability called Haki. This power can cause people much weaker then he is to pass out in his presence and has been shown to have the ability to cancel out any of the Devil Fruits powers. Besides this, Shanks has shown to have no super powers.

His power and influence as a pirate is known world wide as a member of the Four Pirate Emperors.

Their eyebrows look so different… any thoughts?

ONE PIECE & ALICE IN WONDERLAND